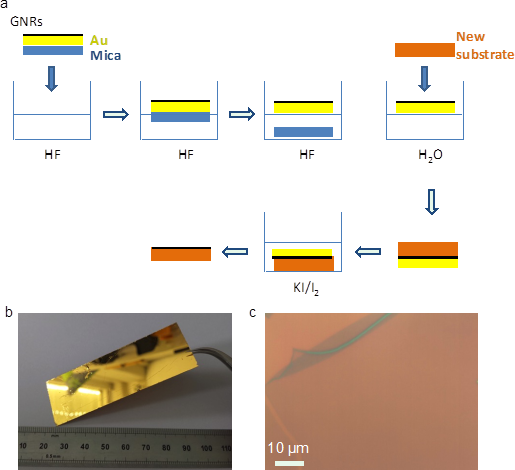 MPIP has synthesized a large variety of structurally well-defined graphene nanoribbons (GNRs) with different widths and edge structures in solution and comprehensively characterized, demonstrating their highly defined structures and modulation of the bandgaps.

A new surface-based synthetic protocol was also developed, based on the chemical vapor deposition (CVD), which enabled facile fabrication of GNR films, extending over large areas (manuscript submitted). The CVD-grown GNR films can be readily transferred to dielectric substrates for device applications. GNRs with varying structures have been achieved by the CVD method, including 9-AGNR and heteroatom-doped GNRs, and transferred onto other substrates for the device studies. On the other hand, solution synthesis of GNRs with different widths was achieved for fine-tuning of the bandgap, and notably the structural distortion was demonstrated to significantly affect the band structure of the GNRs without modulating the aromatic core structures.

Novel nanographene molecules, with zigzag edges, heteroatom-doping, or a defined cavity, have been synthesized as model structures for the corresponding GNRs (JACS 138, 4322 2016, JACS 138, 9021 2016). Finally, we have accomplished the on-surface synthesis of pristine as well as edge-modified 6-ZGNRs and demonstrated the presence of the localized edge states (Nature 531, 489, 2016). We have further fabricated the chiral (4,1) GNR, which also accompanied the edge state as predicted by the theory. Further characterization of thus obtained GNRs as well as experiments for the device integrations are still in progress.

Graphene ribbons (ref.4) have been theoretically predicted to have a band gap that could be tuned by tailoring their width and edge geometry (zigzag or armchair). Moreover, atomic control of size and edges may lead to novel mechanism of spin splitting of the energy bands. That is why much attention is paid to bottom up approaches to obtain GNRs with atomic control. GNRs have been produced in liquid phase exfoliation and by etching graphene using high resolution electron beam lithography. The first produces GNR with relatively uniform edges but the production yield is low compared to larger graphenes exfoliated in solution. The second approach produces ribbons with edges that have zigzag and armchair contributions, conditions that cannot be controlled or reproduced from ribbon to ribbon. Controlling the exact chemical structure of GNRs is a key to tailor the electronic and magnetic properties and this is therefore an open field of research offering many opportunities if the dream of graphene based (spin)electronics is to become possible. (Ref.4)

The extraordinary magnetic properties exhibiting large uniaxial magnetic anisotropy in combination with unusually high blocking temperatures in the bulk (T>40K) and very efficient Quantum Tunnelling of the Magnetization. (Refs. 2 and 3)