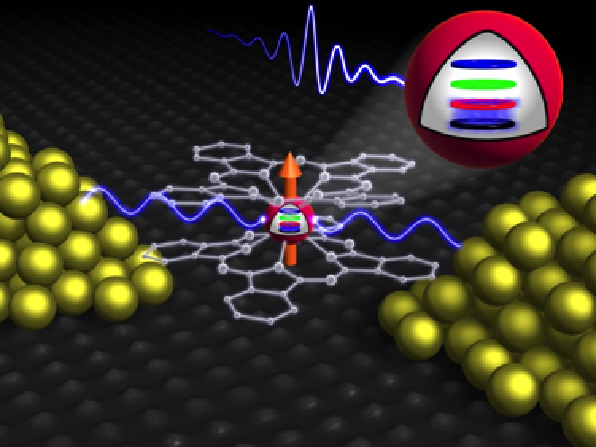 Molecular spin transistor with gold electrodes. Nuclear spin qubit transistor based on a single TbPc2 molecular magnet. The molecule, consisting of a Tb3+ ion (pink) sandwiched between two Pc-ligands (white), is coupled to source, drain, and gate (not shown) electrodes. The four anisotropic nuclear spin states of the Tb3+ (coloured circles) can be manipulated with an electric field pulse.
Science 2014, 344, 1135-8. DOI: 10.1126/science.1249802. 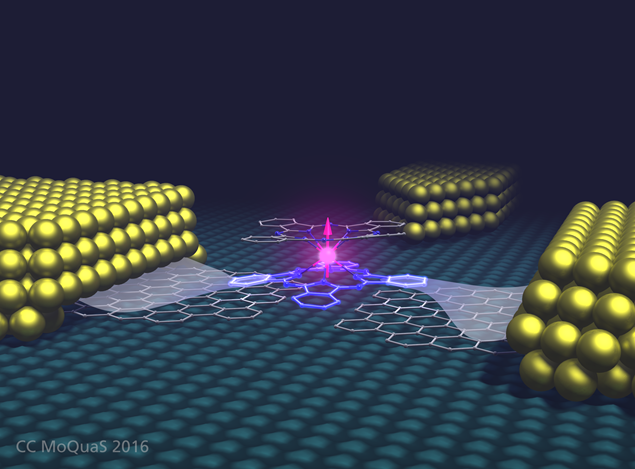 Molecular Spin-Transistor (Ref. 1 and 8) are the archetypical devices in molecular electronics. They are essentially single electron transistor with nonmagnetic electrodes and a magnetic molecule as the island. They are, thus, three-terminal devices where electrons flowing from source to drain through a magnetic molecule and charge transport is also tuned via the gate voltage Vg, and/or by an external magnetic field. Besides the control on the interplay between charge current with electron spin, the challenge of MoQuaS is to achieve a reliable electronic readout of the nuclear spin of an individual metal atom embedded in a single-molecule magnet.

Spin Valve. (refs. 6 and 7) The alternative approach to read out a molecular spin is an “indirect probe” scheme, where the charge current passes through a non-magnetic quantum conductor (CNT or graphene nano-constrictions or GNR) to which the SMM is integrated. The carbon based conductor is in the typical gated three-terminal device configuration and works as a quantum dot. These quantum conductors are very sensitive to the magnetic state of the SMM allowing for a fully electric read-out of the spin state. The specificity of this device is that the current does not pass through the magnetic molecule, assuring minimal back action. Molecular spins act as polarizers by tuning the energy level in the quantum dots. In this way the devices effectively work as spin valve although the microscopic mechanism of functioning still need to be explored and understood. Here, we plan to control the coupling between the molecule and the conductor at the synthetic level by suitable ligands in order to achieve the optimum interplay between the molecular spin and the quantum conductor and to shed light on the microscopic mechanism of functioning of these class of devices.